Baseball skills vary, but the love for the game stays the same 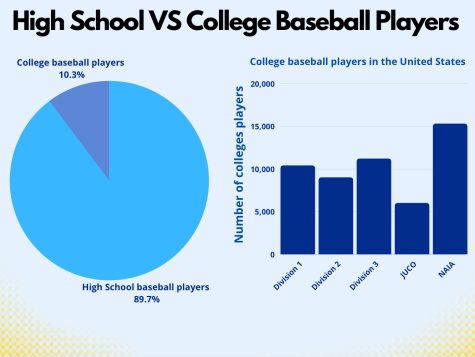 So You Want to Play College Baseball?

I sat down with Jarod Wandersee, a player from the University of Concordia in St. Paul to talk about his college baseball experience. He provided me with some great insight on what the college baseball lifestyle looks like. He also provided high school players some tips on how they can play baseball at the next level.

Q: When did you start to think about playing college baseball?

Q: What would you tell a high school baseball player who is thinking about college baseball?

A: The biggest thing is to look at the school first and baseball as a bonus. Think of it as if you were to get hurt would you still want to stay there because your degree is what is going to carry you in life after college. I would also say that you would want to notice the culture and the values that the program has and see if it aligns with your values.

Q: What are the 3 most important things a high school player can do to maximize their chances of playing in college?

A: The first thing is getting your name out there. The second thing is to not rush into committing to a school just because you see other players committing. The third thing is you never know who is watching, so don’t take any days off. There might be a coach in the stands or someone that knows a coach at a school who says that you should take a look at this guy.

Q: What is the hardest part of adjusting to the college game?

A: The hardest part is that everything is a little bit faster and bigger. In high school, you may have had a few good hitters but in college everyone in the lineup is good. Pitchers also throw a lot harder and players are more athletic and better defensively as well.

Q: How is coaching different in college than in high school?

Q: What is the biggest thing a player will overlook when thinking about playing in college?

A: I would say the time commitment. It is a lot more than what you did in high school no matter what level you play yet. I would say get good at managing your time on the bus, before/after practice, and planning out your day in advance so you know when you will have time to get things done.

Q: As a freshman were you prepared for how physically and mentally draining it would be to play college baseball?

A: No, because I didn’t understand how much time goes into a baseball season. When I was a freshman I would go to class at 8 am and then go and lift at 10 am, then I would go to practice and after practice, I would do homework. It was more than I expected for sure.

Q: Can you take me through a day in the life of a college baseball player?

A: You’ll usually have to lift three times a week, practice every day, three games during the week and a doubleheader on a Saturday and one game on Sunday, and only one day off a week.

Q: How did you learn to manage your time with the busyness of a college baseball schedule?

A: It was tough. The biggest thing for me was learning how not to procrastinate. It was pretty bad in high school and if I put it off until the last minute it would not be very fun for me and I wouldn’t produce the best work I was capable of. I also had a study hall freshman year that helped me a lot because I knew I had a time where I would strictly be doing homework and nothing else. I also learned how to plan out my weeks so that I can plan my free time accordingly to get my homework done.

Q: What are some common misconceptions about being recruited to play college baseball?

A: You don’t need to play the expensive travel ball teams to be seen. You don’t need to pay thousands of dollars to travel every weekend and play in these tournaments to be recruited. Another huge misconception is Division I or bust. You can play at a high level no matter what division level you’re playing at. You should just worry about finding the best fit for you.

Q: As a high school player how would you go about finding the right fit for college?

A: The biggest thing would be making sure that the school you were looking at has what you want to do after college as a major, but if you don’t know what you want to do that is fine. The second thing I would also consider is the distance from home and whether you want to stay close to home or go farther away. The last thing that I would consider is the culture of the program and the values that the team/coaches have. I would make sure that both of your values align and that you could see yourself being comfortable in that program for four years.

Q: What are some questions a player could ask a coach when they are trying to find the right fit?

A: What is the culture like, What does a daily routine look like for your players, and what role do they see you playing for their team.

A: Showcases are not the only way to be recruited. They can help but by no means are they the only way to get recruited. I think the best thing that has happened to baseball recruiting is Twitter. You will see guys posting videos of them hitting and throwing with their stats on Twitter and that allows them to be seen by college coaches across the country. There are also accounts specifically for helping players get recruited. You can also film a recruiting video to showcase your ability and send it to coaches to help you get recruited.

Q: What are some things that college coaches like to see in a player?

A: They like to see good teammates, kids that work hard, and unselfish players.

Q: What are some things college coaches don’t like to see in a player?

Q: Once you get to college how do you make sure you get better so you can stay at the college level?

A: I would say work hard from the start. I would also say knowing your role and being coachable are also some big things that will help you stay at the college level. Another thing is executing your role to the best of your ability no matter if you are a starter or a bench player.

Q: How do baseball scholarships work?

A: Every Division I and Division II school gets 11.7 full scholarships that they give out to their players. Most players get a scholarship package when they sign their National Letter of Intent (NLI), which is good for a year. Every year you resign your NLI with the amount of scholarship money you will receive for that year. In Division III there are no athletic scholarships but the school finds more ways to give you money through academics.

There are many different reasons to coach high school baseball. Sophomore baseball coach at Minnetonka High School Nick Gabler’s reason for coaching is to help kids succeed in things that aren’t baseball-related through the game of baseball. Coaching high school baseball is a unique experience for coaches around the world to positively impact kids’ lives on and off the field. High School coaches often go unnoticed when people think about who impacts a kid’s development the most throughout their high school years. Baseball coaches have a responsibility to help kids grow on and off the field. At the high school level, most coaches are coaching because they want to use their love for the game of baseball to help kids grow and succeed. In high school, success can be measured in many different ways such as your record or level of play. Freshman baseball coach Bailey Melz defines a successful season as seeing all of your players get better as players and as people. When it is all said and done baseball coaches are here to teach their players the skills of the game but also the skills of life.

Making Miracles on a Baseball Field

At the highest level the game of baseball is usually about the kids who have superb athletic ability that allows them to hit the ball the farthest and run the fastest. However, The West Metro Miracle League (WMML) aims to give kids with disabilities an opportunity to play the illustrious game of baseball. This baseball league gives kids with disabilities the experience of playing the game they love for 2 innings at a time. In 2008 the WMML started with 33 players and 4 teams and played on Field 5 (dirt field) at Bennett Family Park in Minnetonka. There were 250 community buddies and volunteers that participated that season to help athletes feel welcome and confident on the baseball field. The West Metro Miracle baseball League is about making new friends, building self-esteem, and being treated just like other kids. The league uses a “buddy” system which pairs each player with a peer or adult. Today the West Metro Miracle baseball league recruits high school and little league players to help participate in the game and encourage and cheer players on during the 2 inning game. The name Miracle is fitting because the kids who participate in the West Metro Miracle baseball league are experiencing an opportunity unlike any other by engaging with their peers and their community through the game of baseball.